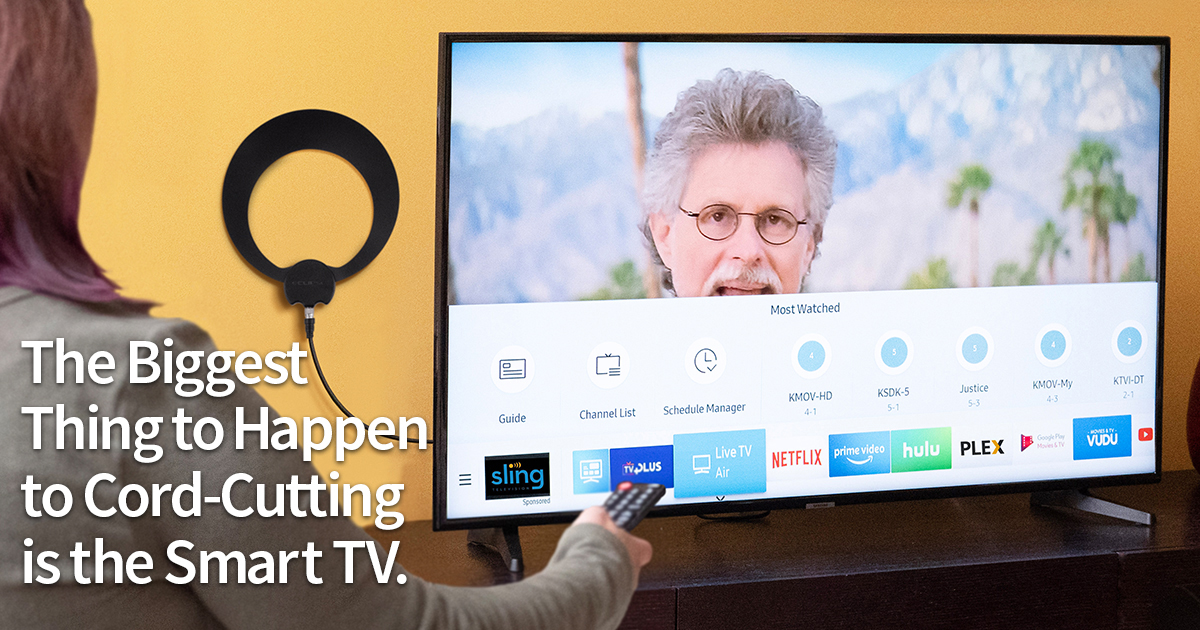 A few years ago, the biggest frustration cord cutters had was that it seemed difficult to set up an antenna. How times have changed! Today, it’s so easy, it’s finished before you even know the process started. Maybe you got a smart TV for Christmas or maybe someone wise gave you an antenna. Just to show you how simple setting up a TV antenna really is, we chronicled our installation of a new Smart TV from Samsung. Follow along and see for yourself!

We purchased the new Samsung – 50″ Class – LED – NU6900 Series – 2160p – Smart – 4K UHD TV with HDR, on sale from Best Buy. We knew we wanted to hook it up to our antenna to watch free, over-the-air broadcast TV. We also planned to connect it to all of our streaming services.

We did all of the typical things: pulled the TV out of the box and connected it to power, then grabbed a TV antenna: the ClearStream ECLIPSE® Indoor HDTV Antenna (rated #1 best indoor TV antenna in 2018) and plugged it into the back of the TV. This took literally 30 seconds. Then, we turned on the TV and the Smart TV interface appeared. The first question we were asked was whether we were using an antenna or cable. We’re cord cutters, so you know what we chose: ‘Antenna’.

Instantly, it said we had 45 channels. We didn’t even have to do a channel scan! It happened automatically, and we were ready to watch. Samsung calls it “Live TV”, which is an option in the Smart TV menu that appears just like all of the streaming app options (Hulu, Netflix, Amazon, YouTube, etc.). Best of all, “Live TV” was toward the top of the menu, so we think Samsung knows a thing or two about what their customers want, and that’s high-definition, over-the-air TV for FREE.

We chose the ClearStream ECLIPSE® because it is our most popular indoor antenna and Wirecutter, among other top-tier technology sources, has consistently rated it as the best indoor antenna on the market. At $39, it’s a few dollars more than the inexpensive knock-off flat antennas, but it’s worth it for its true reliability, long-lasting materials, and excellent picture quality. Just as important, it saves you the headache of constantly apologizing for your favorite show breaking up or missing a big play in the game you and your friends have waited for all week.

So, for less than $400, we had a 50” Samsung 4k TV with a ClearStream ECLIPSE® antenna set up in less than a minute. We get pretty excited when major TV manufacturers realize that antenna TV is mainstream, and that cable is losing momentum each and every day. But we’re even more thrilled to see how easy Samsung has made the process of setting up a TV antenna.

Now, for the hard part: setting up four streaming accounts with all of the passwords we can’t remember and maneuvering the on-screen keyboard with those little arrows on the TV remote. We were committed, though, because we love streaming and think it complements a TV antenna as a complete solution to become a cord cutter. In all reality, that process only took a few minutes, but it was an eternity compared to the antenna setup!

The bottom line is that in 2019, the easiest part of setting up your Smart TV is the antenna. It takes seconds, they’ve made channel scan an integral part of setup, and the option to watch “Live TV” is front and center. Cord-cutting is the way of the future and we’re so glad that important TV manufacturers are on board!